This Saturday Nevada will caucus to determine how many delegates will go to which candidates running as Democrats in the 2020 race for the White House. The most significant political force to weigh in on who should get the ultimate nod on this special day for national politics will be Local 226, The Culinary Union.

This reality is much to the chagrin of a common enemy I share with this particular union, Billionaire Brothers and Sophisticated Scam Artists Lorenzo Fertitta and Frank Fertitta III. Suddenly the blackjack tables are turned in Las Vegas. It used to be the Fertittas wielding power over the union, refusing to acknowledge stringent efforts to unionize their casino chain. Station Casinos, AKA Red Rock Resorts is now losing the fight. The Culinary crew is infiltrating one Station establishment after another.

The Palms Casino, the latest acquisition for Station Casinos, is one of the last bastions of union resistance. The Fertittas already sunk hundreds of millions of dollars into upgrading this casino, and the culinary union fight actually resulted in the threat of financial kickbacks from the government getting jammed up by congressional democrats. Prior to the vote this Saturday, some democratic candidates for president may actually even join the picket line at The Palms and herald the Culinary Union effort to grab another piece of the Fertitta casino empire's pie.

This is a nasty fight, one that countless union dues have gone toward waging relentlessly over the years since I began investigating the Fertittas for their shady involvement in the Xyience scandal. I've actually personally been interviewed at length by Culinary Union researchers on multiple occasions. Much of the information they put on their anti-Fertitta Web-sites originated with my reporting here and simply expanded on that work. At one point this fight was so fierce that the union resorted to what I saw as a sick and twisted campaign to make fighters in the UFC (also owned by the Fertittas at the time) believe that this same union would step up and stand up for their rights to fair treatment, too. The culinary union put up a Web-site pointing to a potential effort to organize fighters but never really bothered to make any legitimate foray into that realm. It was a bluff I personally blasted in an article on Rant Sports.

Now that the Fertittas are out of the fighting business altogether, I can look at this union a bit more objectively and perhaps forgive them for biting off more than they could chew years ago. After all, their people definitely picked up where I left off with exposing these spoon-fed crooks moonlighting as successful self-made men.

If you wonder just how much this feud is hurting the brothers and their casino investors, consider the moves they've made recently to pump up the stock with personal investments from family trusts and the suggested selling of senior notes to raise $750 million. They are even shopping around property they own to pay down some of the massive debt they've incurred. The fact that this company once again left the veil of private ownership and became a public entity did not stop the managing interests from tainting the brand with their financial tricks.

The Palms project alone comes in at an expense of nearly $1 billion if the cost of the purchase is included. This gamble will really have to pay off, and they will have to pinch every penny moving forward to survive an ongoing battle like this with the likes of the Culinary Union. Only the infusion of their own personal capital staved off a completely negative trend in the Red Rock Resorts stock that saw more investors losing shares than acquiring them last year. That money was not even really all that important to the Fertitta brothers themselves. It was more like a raiding of the piggy bank where they keep the future inheritance their children will enjoy someday. All of the funds came from trusts, not really out of the personal coffers they covet and hide in multiple business entities like "Fertitta Capital" and "Fertitta Enterprises."

The Culinary Union is in this for keeps, and now they are clearly at a tipping point ahead of this caucus. There is no doubt the Fertittas and their friends will be flooding Donald Trump and the rest of his party representatives with donations to stave off a Democrat takeover after the 2020 general election. If the United States decides to elect a Democrat as president, the Fertittas will likely get out of the casino business as fast as they possibly can. The union takeover will be all but inevitable.

Already the pressure is becoming unbearable as there is no stone left unturned in the fight to expose the Fertittas as frauds. At one point Station Casinos was voted by workers as one of the best places to work in Nevada, but these days Culinary folks are alleging that the chain is an unsafe working environment that OSHA should investigate. It's hard not to look back at this very moment on the tumultuous bankruptcy the chain escaped virtually unscathed. Billions of dollars in debt were erased. The amount of money spent on "going big" with The Palms may come back to haunt the company. This is especially true since there is such a focus on art involved in the $690 million overhaul. The Fertittas have not had the best luck in the art world. Frank Fertitta III once bought what was later determined to be a fake Mark Rothko painting. He paid a whopping $7.2 million for the con in the classic case of a swindler who got a taste of his own medicine. Lawsuits helped him recover the money he lost, but it was still an indicator of how the brothers often spend their income recklessly and don't use the best judgment in business decisions.

It is no surprise then that there are rumors that the Fertittas want a way out of the casino business, and they may choose the path of a complete sell-off. Only a few properties would remain under their control in that scenario, namely The Palms and Palace Station. It would also take a monumental effort to do this kind of transaction under public ownership if it doesn't represent an instant and significant benefit for all current investors.

There is also still tremendous buzz about the Fertitta brothers being interested in owning an NFL team, which would likely depend on a major sale like what I described above. Still, I would not offer any odds on that prospect unless they ingratiate themselves with a more wholesome group of partners to make the deal. As is, they are barely suitable to be given a gaming license in any state. Their connection to various cases of corruption, scandal, fraud and abuse of the bankruptcy laws is telling. They cannot run from their history, as this recent Chicago Tribune article explains. The National Football League would be wise to keep them far away from any team ownership position.

As for this weekend's caucus efforts, look for the Culinary Union to take advantage of the spotlight that will be on Las Vegas and Station Casinos on Saturday. Regardless of whether or not the Democrats have any chance to unseat Trump, the Culinary Union will continue to fight for better treatment of their workers. Their momentum is palpable, and their influencing power is potent. For once in their lives, it may actually be time for the Fertitta brothers to play nice and surrender in this war of attrition. They will only hurt themselves and their investors in the long run if they keep butting heads with this growing political force. Financial losses can be recovered, but reputational damage is typically more permanent. 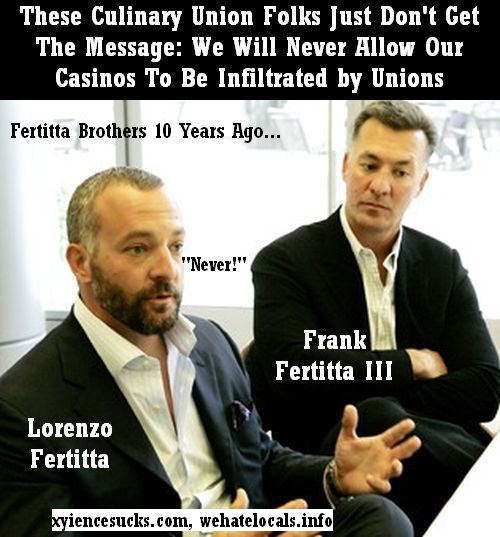 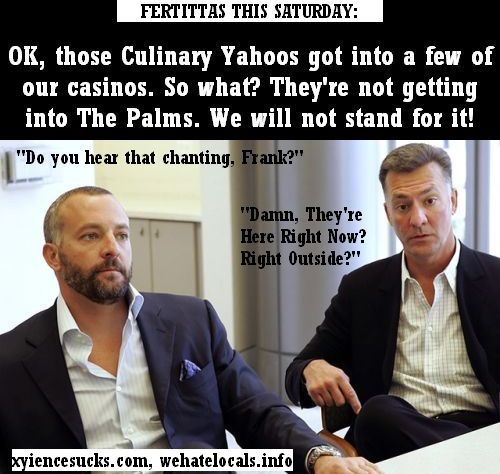 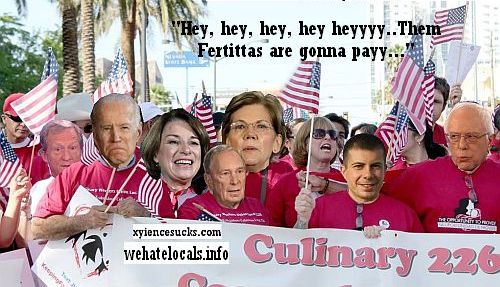 Posted by Writerfortruth at 1:40 PM

As reported by Stanford Medical, It is really the SINGLE reason women in this country get to live 10 years more and weigh on average 19 kilos lighter than we do.

(By the way, it is not about genetics or some secret-exercise and really, EVERYTHING around "how" they are eating.)

Hello, the way you written your post is so interesting .
Keep it up !
Please visit our website too.Click the link below
카지노사이트

Hello, I enjoy reading all of your article post. I wanted to write a little comment to support you.바카라사이트
https://game79zone.com 바카라사이트

You have a very wonderful site! The articles are awesome. Keep it up! Anyways, if you have time, try checking out this website.
카지노사이트
https://yhn876.com/ 카지노사이트

Interesting site! Informative and helpful. Continue making exceptional articles! And if you have time, you can check out this website.
카지노사이트
https://yhn876.com/ 카지노사이트

I read a article under the same title some time ago, but this articles quality is much, much better. How you do this 바카라사이트 i really injoying this.i want to share our website. this is promising and worth reading. i hope you our visit our website..

Remarkable blog! Thank you for sharing this incredible piece. It will be beneficial to many of your readers. Continue inspiring! Please spare a few minutes of your time to look at our website.


It's a great thing that you shared an educational and motivating information blog, to all your readers! Well done my friend! I hope you can visit our marvelous site too. Keep it up!
카지노사이트
https://yhn876.com 카지노사이트

I am continually impressed by the way you wrote your article its fantastic. Please cisit our website.
카지노사이트
https://yhn777.com 카지노사이트

Interestingly you write, I will address you'll find exciting and interesting things on similar topics. Visit our website too. 바카라사이트
https://game79zone.com 바카라사이트

GREAT WORK !!! This blog presents a very valuable information. Keep up the good work! Visit our website too. Thanks!

Good to know that there's some useful vlog here. This can help others too.
안전놀이터

Very creative and stylish blog of yours my friend. Keep up the good work! Thanks for this.
카지노사이트
https://yhn876.com 카지노사이트

Full of information, this is really good ang one of the best articles that is reall helpful and worth reading for everyone. Thank you for sharing, if you want some kind of site that really good, just visit our site. 카지노사이트
https://yhn777.com 카지노사이트

Your website is indeed great! Keep up the good work! If you're also looking for something interesting, feel free to visit our website.
카지노사이트
https://yhn777.com 카지노사이트

Thanks for the nice blog. It was very useful for me. I'm happy I found this blog. Thank you for sharing with us,I too always learn something new from your post. Just visit our website too. 바카라사이트 https://game79zone.com 바카 라사이트

Thanks for the great post on your blog, it really gives me an insight on this topic. Visit our website too. 안전놀이터 https://pmx7.com/ 안전놀이터

This is very interesting, You’re a very skilled blogger. I’ve joined your article feed and look forward to seeking more of your great post. Also, I have shared your site in my friends!
카지노사이트
https://yhn777.com 카지노사이트

It's an informative topic.
It helps me very much to solve some problems.
Its opportunity is so fantastic working.

A good and very interesting site, i really love it. Thank you guys for sharing this. If you want to try another site, just click here: 클릭
Https://yhn707.com 클릭